Bedford Blues has teamed up with a number of Charles Wells pubs to host a ‘Legends Tour‘ across the area.

The six events, which are also supported by Eagle Brewery, will give rugby fans a chance to listen to and chat with former Blues players featured on the side’s Eco Cup series last season.

All events start at 7pm with food on arrival before a Q&A with the former player hosted by Blues Chief Operating Officer, Gareth Alred.

On 20 June, D’Parys will welcome Ben Whetstone or ‘Bedford Ben’ as he is affectionatly known!

Ben made 282 appearances for the Blues between 1992 and 2005, scoring an incredible 121 points. Still living in Bedford and acting part-time as the Blues’ playing recruitment officer, Ben will be sharing stories from his playing days at Goldington Road. 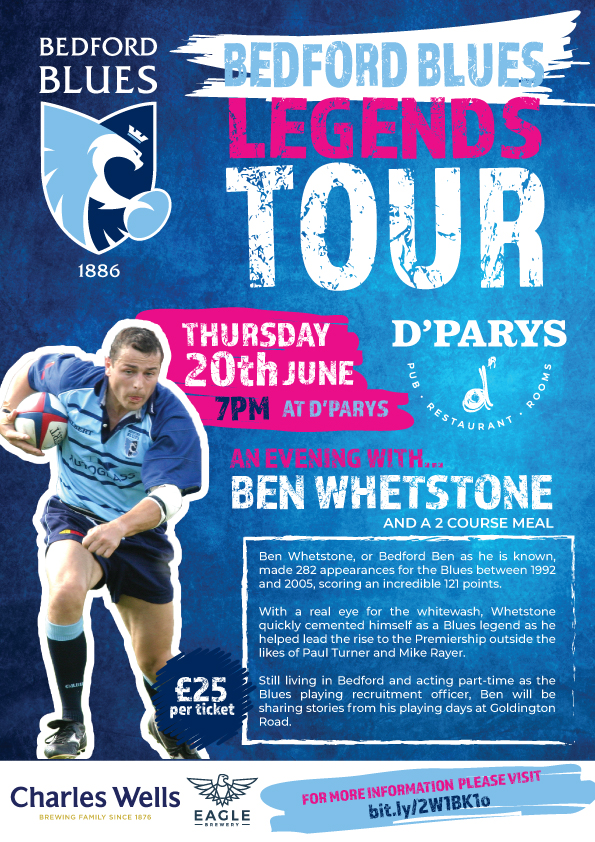 Tickets are £25 and the evening will include a two course meal and a free pint of Eagle on arrival.

It’s worth highlighting the event at The Foresters as this is a slightly different night. Rather than meeting a Blues Legend in person, you’ll have a chance to pay tribute to Blues’ legend Mark Howe, who passed away after fight with Prostate Cancer a few years ago.

His son, Ben, now co-owns and runs the Foresters Pub so the venue couldn’t be more apt. £5 of the ticket price will also go to Prostate Cancer UK.

To book places and find more information for any of the events, please click the links below.